Here’s the news you’ve not been waiting for: Vanilla prices remain sky-high in Madagascar, price setter for the global vanilla market.

We just spent three weeks in the Sava, driving its famously rutted mud roads into the bush for the start of vanilla pollination.  During our trip, we visited villages and walked the vanilla plantings to assess the bloom. We squatted on the floors of huts, talking with farmers and inspecting their vanilla beans.

And next to us on the flight to vanilla country sat enormous piles of Ariary banknotes strapped down inside the airplane cabin, a telling metaphor for a vanilla market where jaw-dropping piles of cash are landing in one of the poorest places on earth.

In villages without plumbing or electricity, much less checking accounts, we heard widespread reports of kidnappings, theft and vigilante justice. Vanilla bean quality is all over the map but generally plummeting. 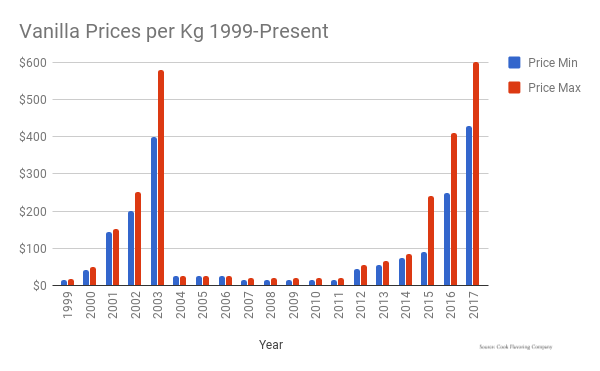 Lowest grade “cuts” sell for around $400/kilo, an astounding figure for what in normal times are throwaway vanila beans. They have scant aroma, but sell at five times the price that top-notch vanilla beans fetched six years ago.

We refuse to buy these vanilla beans. Yet exporters told us many flavor houses are snapping them up by the ton. Technically these beans are vanilla, but we are sad to report that end users paying hefty prices may wind up getting something that is pure vanilla in name only.

Immature harvesting is rampant. When a kilo of vanilla beans represents a year or more of wages for the average Malagasy, theft becomes a nightmare. Loath to risk leaving their vanilla beans on the vine one day longer than they absolutely must, farmers are picking them way early. These vanilla beans are as intoxicating as a hard green peach.

Large exporter/curers, where most flavor houses obtain their vanilla beans, are in no hurry to sell. Many are running lean inventories. Some are buying only for existing contracts with advance payments of 50 percent and more. Everyone says prices have to fall, but few seem to expect a crash this year.

Vacuum packing is everywhere, despite a government ban. The practice destroys beans that are not fully cured, as most of these are, by creating nasty-smelling phenolic compounds. But farmers do it anyway to retain moisture content, keep their beans heavy and pad costs.

Farmers have extravagant price expectations. Many are withholding a big share of their production — how much is anyone’s guess — in hopes of cashing out their lofty dreams of $800 a kilo. They will surely be disappointed. However wonderful, vanilla is not a necessity of life. Even boutique organic ice cream makers face limits on what they can charge for an ice cream cone. There’s always chocolate, dare we say. 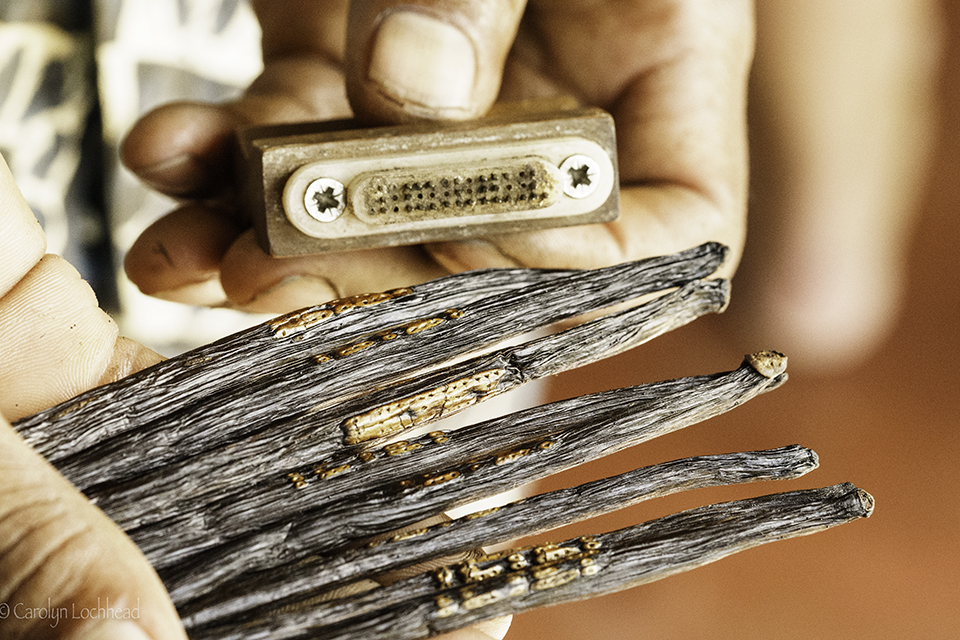 Such old-fashioned thievery as refusing to deliver on paid contracts or substituting low-grade vanilla beans is always a risk for buyers here, but it’s gotten worse.

We have no crystal ball, just observations. We saw weak blooming in the Antalaha and Sambava regions, and serious damage from Cyclone Enawo, arguing for a tight vanilla market. Farmers have expanded their plantings, but in their exuberance have disastrously stuck vines in full sun, with wretched results.  Yet vines further inland appeared healthy and had strong flowering, arguing for higher production.

Signs of a classic bubble are popping up. Like the shoe shine men of 1928 Wall Street, or Las Vegas homebuyers of 2008, tiny players are speculating. Even big, sophisticated vanilla market players think prices aren’t coming down, often a prime indicator of an impending crash. 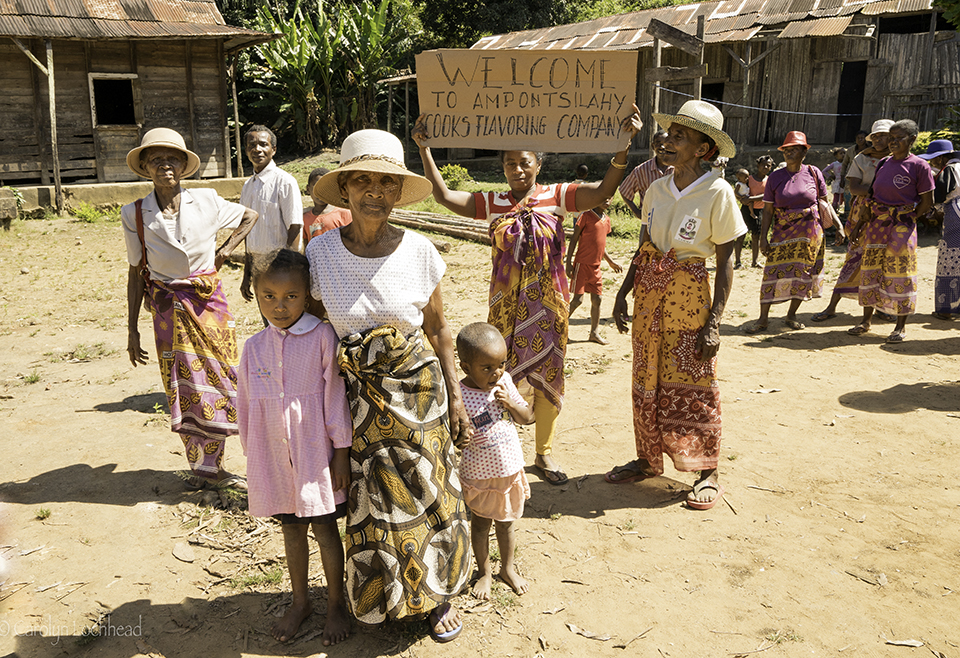 Production continues to increase elsewhere and will make a significant dent in Madagascar’s vanilla market dominance. High prices have made vanilla profitable again in its native Mexico, which is producing some lovely vanilla beans. Reaching maturity at four years, recent vine plantings throughout the Tropics are nearing production.

The crisis is now in its third year, about the length of the last one that ended in 2003. Current vanilla prices are unsustainable, period. The sooner they drop the better. Today’s conditions are inducing all manner of terrible practices throughout the supply chain. The longer prices stay high, the greater the risk that when they do drop, they’ll come down hard and fast, with devastating consequences for farmers.

The market for gourmet vanilla beans  has already crashed. Top-end restaurant chefs have abandoned their beloved shiny black pods. Chefs, accustomed to beans at $60 a pound, blanched when beans hit $160 and stopped buying after that. Raspberry souffle anyone? 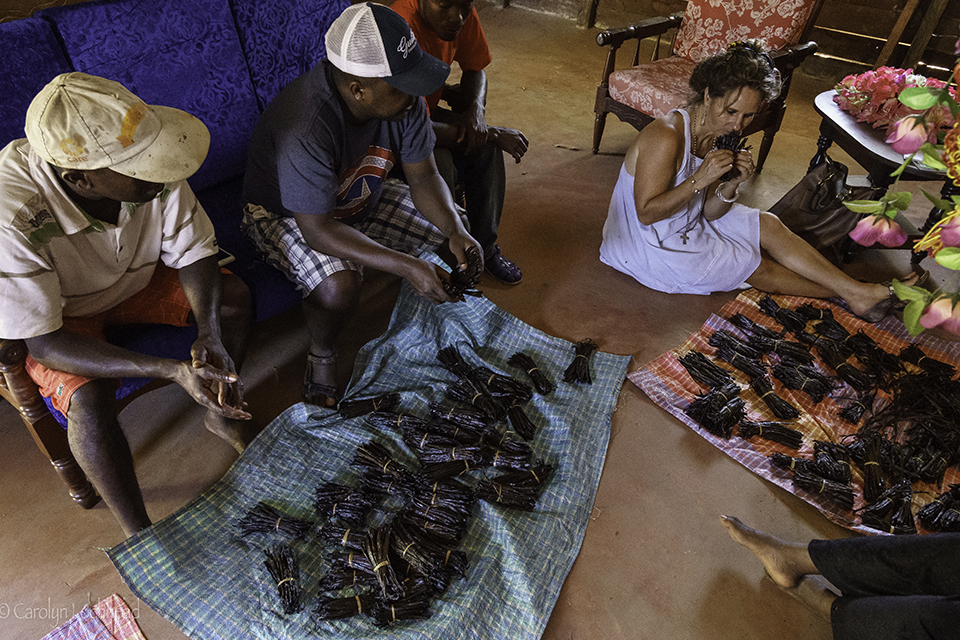 As for us, we’re in the vanilla business. Having spent spent 100 years cultivating our reputation, we are not about to abandon it now. We insist on quality and are going to extraordinary lengths to maintain it. Our customers can rest assured that they are getting what they pay for.  We are not buying “cuts,” “quick-cured” or immature vanilla beans. For those who cannot stomach current prices, we recommend our natural vanilla blends that can slash costs and have far superior flavor to the junk extracts that now permeate the market.

To reduce costs we are buying directly from farmers, establishing cooperatives in villages to secure high-quality vanilla beans, and insisting on fully ripened vanilla beans. We are scouring the world outside Madagascar as well.

We deeply value your loyalty. You can always get us on the phone directly. Just ask for Jo or Don. We love to talk vanilla even in the most trying times, and will help you every way we can.